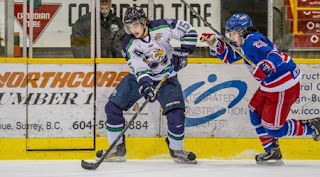 Nathan Renouf's third-period goal stood up as the game-winner as the Eagles won their fifth straight home game, 5-3 over Prince George Thursday.

Renouf accepted a left-wing feed from twin brother Jonah, unleashing a hard snapper into the top right corner for his seventh goal of the season, and third game-winner.

Surrey, playing its final game prior to the holiday break, endured a cagey, scoreless opening frame that was highlighted by a mid-period scrap between Braedan Russell and Marco Ballarin. Russell took offense to a hard hit on linemate Luke Sandler, and the pair wrestled before each combatant landed one late blow on their way to the ice.

Brett Mulcahy opened the scoring early in period two, redirecting a hard centring feed from Colton Mackie past Spruce Kings starter Jesse Jenks from just outside the crease. Russell doubled the Surrey lead later in the frame on a power-play, taking advantage of a Sandler drop pass in the high slot and wiring a wrist shot past Jenks' glove hand.

The Spruce Kings found the scoreboard 1:28 after Russell's goal through Jake LeBrun, who found a loose puck at the feet of Surrey netminder Bo Didur and poked the rebound past his outstretched left pad. The one-goal differential wouldn't last long, though, as Russell put home his second of the game on another hard wrist shot after cutting across the Prince George defensive zone.

The visitors would round out the scoring in a busy second period 1:18 from the break, again by capitalizing on a loose puck near the net. Jeremiah Luedtke swept in from the left circle and bashed home his ninth goal of the season to make the score 3-2 Surrey after fourty minutes.

The Eagles found their fourth tally through Renouf 2:17 into the third before Mitch Eden hammered a dump-in off a left-wing stanchion less than a minute later, causing the puck to carom wildly from the boards through the left-wing circle, and past a perplexed Didur.

But like Saturday's win against Nanaimo, the Eagles locked down their defensive zone in period three, thanks in part to nine saves from the 16 year-old goaltender, before Nic Pierog secured the two points with an empty-net goal in the dying seconds.

Surrey's penalty-kill was put to the test Thursday too, but passed with flying colours, holding Prince George off the scoresheet on six power-play opportunities.

Didur made 25 stops to record his second home-ice win in just his third start at South Surrey Arena, while Jenks was tagged with the loss. With the win, Surrey moves to within two points of the third-place Coquitlam Express, who are in action Friday.

Up Next: The Eagles will break camp for a week, and return to action next Saturday, December 28th against the Chilliwack Chiefs. Game time is 7:00 pm at South Surrey Arena. 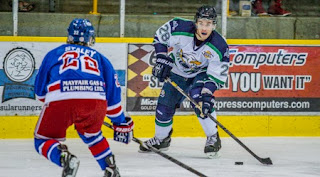 Thursday Audio: If you missed it on the show tonight, click here for a conversation with blueliner Kale Bennett.
Posted by Chris Wahl at 12:33 AM