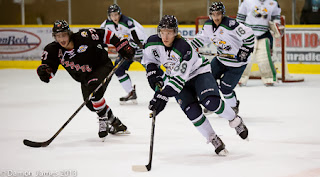 The BCHL league office announced tonight that Eagles forward Danton Heinen has picked up an honourable mention in the Player of the Week awards.

Heinen has been on fire lately for Surrey, scoring the winner against Nanaimo Saturday and rifling a shot into the top corner of the net in yesterday's second period. With 8 goals in his last nine games, the 18 year-old now has 16 on the year, good for second among rookies in the BCHL.

The full release from the team follows:

Heinen, 18, scored 2 goals, including a game-winner Saturday, and two assists in the Eagles' two home-ice victories this past weekend.

In his last 9 games, the Langley product has scored 8 times, totalling 14 points. He leads the Eagles in home-ice scoring with 21 points from 16 games played.

This week's Player of the Week is Landon Smith of Salmon Arm.

Heinen and the Eagles return to action Thursday, December 19th when they host the Prince George Spruce Kings at 7:00 pm at South Surrey Arena. For ticket information, call (604) 531-GOAL (4625) or purchase tickets online at www.surreyeagles.ca.
Posted by Chris Wahl at 7:16 PM