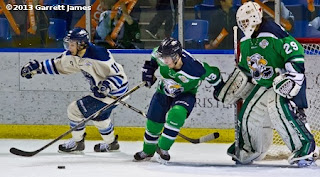 The home side scored four times in the second period to pick up their fifth straight victory over the Eagles, and send Surrey along to their second consecutive away defeat.

The two sides battled through an edgy, yet scoreless first period, with both teams renewing the hostilities shown during the last meeting on Remembrance Day.

Langley would open the scoring just shy of the eight-minute mark of period two on a power-play, when Matt Ustaski unleashed a one-timer over the shoulder of Eagles netminder Bo Didur from the low slot for the first of his two tallies on the night.

Langley would add a second goal while short-handed three-and-a-half minutes later when Mitch McLain was sprung loose on a breakaway on a long pass from blueliner Zach Urban. McLain faked forehand, and lifted a backhand shot over Didur for his 15th goal of the season.

Gage Torrel tipped home a point shot just over a minute after McLain's marker, before the Eagles were involved in a potentially controversial play in front of Rivermen keeper Brock Crossthwaite.

Surrey's Luke Sandler thought he'd scored when depositing a rebound into the open cage at 14:58, but the goal was immediately waved off by referee Duncan Brow for what was initially termed goaltender interference. Upon further review, it was determined Crossthwaite was knocked over by a sliding back-checker and the Eagles were awarded a penalty shot. Nic Pierog then rifled home a snapper into the top left corner of the net on the free breakaway to put Surrey on the board.

The Rivermen would strike again before period's end, again while short-handed. On an odd-man rush, Ustaski finished off a cross-crease pass from McLain to put Langley up 4-1 after two periods.

Surrey would mount a late comeback after being awarded a five-minute power-play after Langley's Jakob Reichert was ejected for a high hit on Eagles veteran Braedan Russell. The visitors, who welcomed back captain Brett Mulcahy and fellow 20 year-old Colton Mackie after both had been sidelined with injuries, found a power-play marker when Mulcahy's shot from in tight snuck through Crossthwaite.

Langley would restore their three-goal lead later in the Eagles man-advantage when Austin Azurdia chipped past a Surrey defender and slid the puck into the empty net.

Surrey outshot Langley 28-26 on the night, but dropped their third straight decision at Langley Events Centre this season.

Up Next: The Eagles return home Saturday to face the Nanaimo Clippers at South Surrey Arena. Game time is 7:00 pm.
Posted by Chris Wahl at 2:26 AM