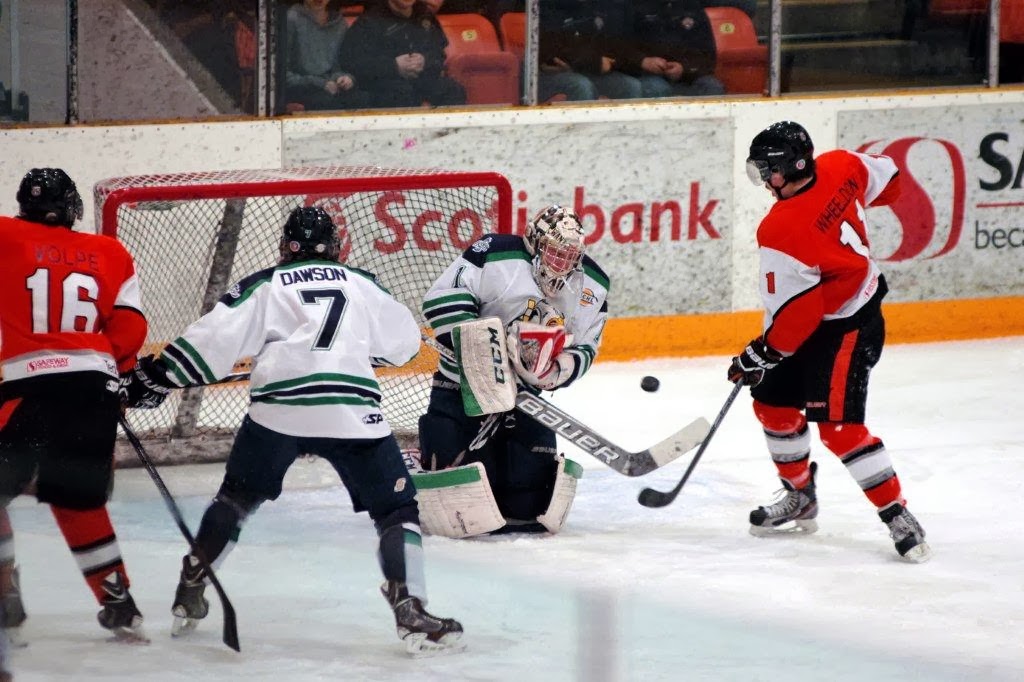 Devon Fordyce earned first-star honours for his show-stopping performance at Cominco Arena. Thanks to Randy Emery for the photos.

A night of firsts for two Eagles helped Surrey to a 3-0 shutout victory in Trail Friday night.

Brian Drapluk's first-period marker, his first in the BCHL, held up as the game-winner, while goaltender Devon Fordyce stopped all 31 Smoke Eaters shots to record his first BCHL shutout, as the Eagles began their Interior division road swing in style with a smart, business-like performance.

A wild first period was accented by Drapluk when, on a Surrey power-play, he sent a low shot goalward that re-directed off a Trail stick past the left shoulder of goaltender Adam Todd. Both sides came out of the gate flying, but Todd and Fordyce stood their ground, combining for 26 saves in the opening frame as Trail outshot Surrey 14-13.

The Eagles enjoyed much longer spells of possession in period two, forcing Todd into several more reaction saves before, on another power-play, they found a breakthrough second goal off the stick of Chase McMurphy. The 19 year-old fired home a shot from just outside the crease after a pretty set-up feed from across the blue paint by Anthony Conti.

Trail would not go quietly, but could not beat Fordyce on four third-period power-plays, including a 70-second two-man advantage early on. The Eagles goaltender was positionally sound all game long and kept his few rebounds manageable as the home side pressed.

Surrey rounded out the scoring late in period three when Jonah Renouf set up his brother Nathan for a one-timer from the Trail slot. The Eagles outshot the Smoke Eaters 38-31.

Up Next: The Eagles complete their Interior division trip Saturday in Salmon Arm. Game time is 7:00 pm.
Posted by Chris Wahl at 1:23 AM