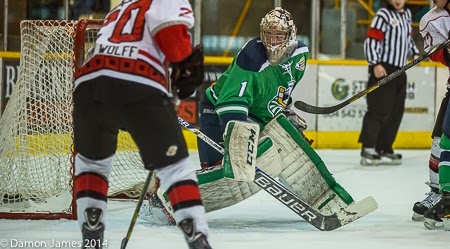 Three first-period goals, and a 37-save performance from Devon Fordyce, paced the Eagles to a 5-2 victory over the Coquitlam Express Wednesday at South Surrey Arena.

20 year-old Braedan Russell finished the game with three points, while Kale Bennett's wrister held up as the winner as the Eagles won their third game in the past four outings, and posted their third consecutive home victory over the Express.

Surrey opened the scoring 6:54 into the opening frame when Darius Davidson banged a rebound past Dushenko after linemate Austin Ferguson sent a puck goalward off a won faceoff in the Coquitlam zone. It was the Semiahmoo minor hockey product's first goal on home ice this season.

Surrey added a second goal 58 seconds later when Russell rifled home the first of his two goals, lacing the puck into the top right corner of Dushenko's net off a sharp wrister from the left-wing circle. Bennett gave the hosts a 3-0 lead just past the midway mark of the period when his low snapper snuck past Dushenko and rolled over the goalline.

The Express, minus captain Ryan Rosenthal and three regular blueliners, were game Wednesday, and answered back on a two-on-one rush just shy of the midpoint of the second period. Bo Pieper one-timed a pass from brother Canon from the right circle, beating an outstretched Fordyce for his 21st goal of the season.

But Russell would answer back quickly, angling a hard pass from Jonah Renouf into the top corner of the net from just outside the Coquitlam crease to give Surrey a 4-1 lead.

Again, the Express pressed in the third, and again they found the back of the net when Jace Hennig raced to the side of Fordyce's goal and jammed a rebound home. Renouf would round out the scoring with less than four minutes left in the game, accepting a pass in neutral ice from Russell, then cutting around an Express blueliner before flicking the puck into the top corner over Dushenko's left shoulder.

Surrey finished the game on a lengthy power-play after Coquitlam forward Joey Santucci was ejected for a checking from behind major on Eagles rookie Michael McEachern. 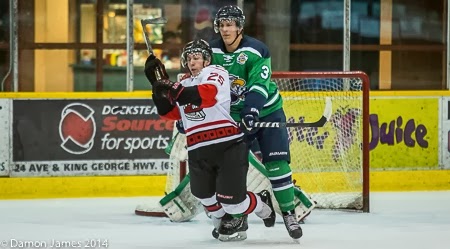 Like last Friday in Trail, Fordyce again was rock-solid between the pipes for Surrey, exhibiting poise as well as taking advantage of committed defensive work in front of him. The Eagles brought a physical edge, too, accented by a second-period check by Anthony Conti that sent Express leading scorer, and recent Wisconsin commit, Adam Rockwood flying. With regulation-time victories in their next two games, the Eagles can mathematically clinch a playoff berth.

Up Next: The Eagles begin a home-and-home set with the Chilliwack Chiefs Friday at South Surrey Arena. As part of Five Hole for Food night, the Eagles will be collecting non-perishable food donations for the Surrey Food Bank at Friday's game.
Posted by Chris Wahl at 11:54 PM