The Eagles won their 2014 opener, a result overshadowed though by the loss of leading scorer Jonah Renouf to a frightening head injury late in the second period.

Surrey came out of the gates flying, scoring three times in the opening thirteen minutes. First, Danton Heinen and Sandler rifled home wristers from the right circle that both beat Capitals netminder Robin Gusse to the blocker side, then Pierog banged home a rebound to give the Eagles their largest lead of the night.

Cowichan Valley's Jordan Topping wristed home a shot through traffic before the first period was out, then fellow forward Dane Gibson capitalized on an early second-period power-play to draw the visitors to within a goal.

The teams traded chances, but not goals, until the 14:33 mark of the second period when Renouf, having just had his stick slashed out of his hands, lost his balance just as a Capital back-checker was turning towards him to finish a hit. The Capital's knee came into contact with Renouf's head in a lightning-quick turn of events, and the Eagles forward remained on the ice for more than thirty minutes as medical professionals tended to him.

Both teams were sent to their respective dressing rooms, only for play to resume when the Eagles forward was taken off the ice on a stretcher. Surrey captain Brett Mulcahy restored the hosts' two-goal lead minutes later on a wrist-shot from the slot, before Gibson had his second goal of the game carom past Surrey goalkeeper Devon Fordyce just prior to the end of the middle frame.

The Eagles found a third multi-goal advantage on a third-period power-play, when Sandler deflected a point shot past Cowichan Valley goaltender Francis Marotte, who replaced Gusse after the first period, but again the Capitals would bring themselves back to within one soon after, thanks to a sharp-angled effort from blueliner Clint Filbrandt.

Pierog rounded out the scoring with his second goal of the night with just under three minutes remaining in regulation time, as Surrey swept the two-game season series from the Capitals and moved back to within four points of third-place Coquitlam with the victory.

Renouf was taken to a local hospital and is recovering. The Eagles would like to thank the medical professionals on hand and those who were called to the rink, as well as the Cowichan Valley Capitals medical staff, for their swift action and assistance.


Renouf also took to social media after the game. 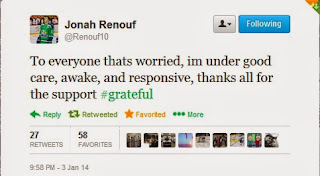 Up Next: Surrey visits the Langley Rivermen Saturday to begin a stretch of four straight games away from home. The puck drops at 7:15.
Posted by Chris Wahl at 2:31 AM