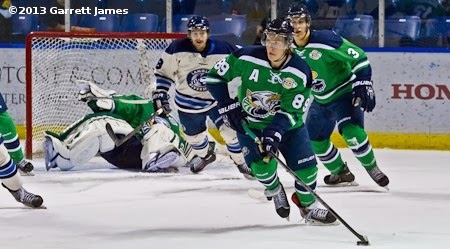 The Eagles and Rivermen both announced the schedule for their Mainland division semi-final series, set to begin Tuesday, March 4th in Langley.

It's the second consecutive first-round playoff series between the two rivals, with Surrey winning a best-of-five affair in four games last season.

Surrey, the fourth seed in the division, have completed their regular season schedule, while the top-ranked Rivermen will play two games in Prince George Thursday and Friday to wrap up their campaign.

The Spruce Kings and Coquitlam Express will face each other in the other Mainland division first-round series.

Today's news release from the team is as follows:

The Surrey Eagles are pleased to announce the schedule for the 2014 Mainland division playoff semi-final against the Langley Rivermen.

Game 7 of the series (if necessary) will be played at Langley's George Preston Recreation Centre as the Langley Events Centre will be hosting the BC AAA boy's basketball provincial tournament.

* - if necessary
+ - game to be played at George Preston Recreation Centre