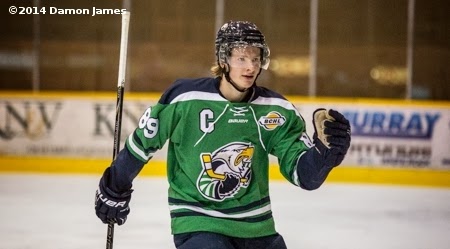 The Eagles can book their ticket to the BCHL playoffs with a second straight win over Chilliwack tonight. Surrey visits Prospera Centre on the heels of a 5-2 triumph over the Chiefs last night at South Surrey Arena on the strength of multi-point games from Nathan Renouf, Danton Heinen, Matt Dawson and Chase McMurphy as well as another workmanlike performance from Devon Fordyce in goal.

The Eagles are brimming with confidence, and would do well to begin the month of February just the way January ended. Surrey has won four of its last five games. Tonight marks an opportunity to improve on the team's fortunes away from home as well; Surrey has collected just two victories away from home within the Mainland division this season. 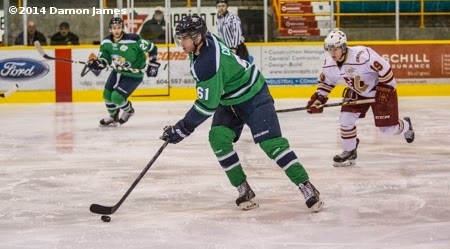 The goal of clinching a post-season berth is within Surrey's grasp, but make no mistake, this team has higher aspirations than simply sneaking into the race for the Fred Page Cup.

Last Meeting: Surrey's 5-2 win last night was just their second against the Chiefs this season. Chilliwack leads the season series 4-2.

Our Opponent: The Chiefs go into tonight's game needing to win to remain in post-season contention, and will certainly rely on another strong performance from either Josh Halpenny or Spencer Tremblay between the pipes this evening (for my money, Halpenny was the best Chief on the ice last night, and by a wide margin). Mathieu Tibbet upped his team-leading goal total to 19 last night, while linemate Zach Diamantoni was sensational in the faceoff circle Friday. The Chiefs are holding Parents Weekend this weekend and brought two fan busses of noisy, enthusiastic supporters to South Surrey Arena last night; no doubt that energy will be present in their home rink this evening.

In the Press Box: Colton Mackie and Mitchell Fyffe remain sidelined for the Eagles Saturday, while Cole Sartorio and Kyle Westeringh both missed last night's game for the Chiefs.
Posted by Chris Wahl at 10:27 AM