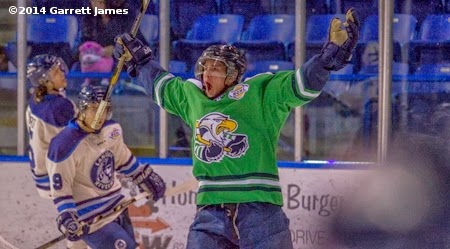 A night after a tough defeat in the series opener, the Eagles go back to work in Langley in search of a two-game split at the Langley Events Centre. Two goals in an eleven-second span in Tuesday's second period proved to be crucial to the Rivermen's success in Game 1, as the hosts skated away with a 4-2 victory to take a 1-0 lead in the best-of-seven series.

Score aside, Game 1 had little to choose between the two sides. The Eagles asserted themselves offensively thanks to a two-goal effort from Anthony Conti, while Bo Didur marked his BCHL playoff debut with a steady, 23-save effort.

Tonight, the Eagles will look to replicate the hard-working effort they put forward in Game 1. Both teams employed a grinding, dump-and-chase style which led to plenty of opportunities for forwards to finish checks in the offensive zone. The continuous physicality could well have an impact on the series in the long-term, too.

The Eagles also ran into a group of persistent shot-blockers in Game 1, but found a way to get pucks to the net as time progressed, peppering Brock Crossthwaite with 17 shots in the third period. Conti's second goal was a direct result of traffic in front of the net as well, and as a sizeable forward, the former Vancouver Northwest Giant would do well to act as a screen in front of the large Langley goaltender.

Game 1 proved to be an engaging opener to this Mainland division semi-final. Game 2 should be nothing less. 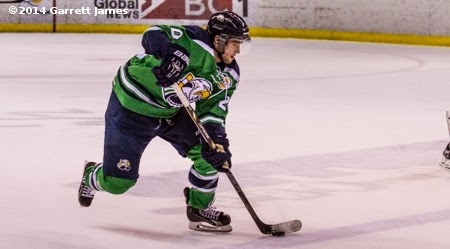 Last Meeting: Surrey's late rally fell just short, and Evan Anderson's goal at 14:30 of the second period held up as Tuesday's game-winner. Shots on goal were even at 27-27.

Our Opponent: Langley used their size to their advantage Tuesday, playing with a physical edge and finishing checks all over the ice. The top line of Matt Ustaski, Mitch McLain and Jakob Reichert contributed heavily to the Rivermen attack; both Ustaski and Reichert play the power-forward role to a tee. Langley head coach Bobby Henderson was named the BCHL Coach of the Year Tuesday, and as part of his playoff game-plan rode blueliners Zach Urban and Chris Forney heavily as well; neither rearguard seemed to leave the ice in Tuesday's third period.
Posted by Chris Wahl at 10:57 AM