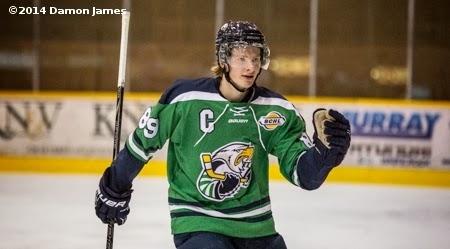 The Eagles captain has secured his NCAA future. Danton Heinen announced via Twitter late Thursday that he will attend the University of Denver following his time in the BCHL. And to put it bluntly, the Pioneers are getting themselves a player. No rookie had more than Heinen's 62 points during the 2013-14 season, as the Langley product caught fire midway through the season and adopted a leadership role following the trade of former captain Brett Mulcahy to Vernon in January.

Heinen scored 29 goals in 57 games this season, 20 of which came at the South Surrey Arena. The 18 year-old also chipped in with 8 power-play goals and 4 game-winning markers, and even a penalty-shot goal against Coquitlam on November 29th.

The full release from the team follows. Congrats "Heinz" on the great news!

The Surrey Eagles are pleased to announce the commitment of our team captain and leading scorer, Danton Heinen, to the University of Denver.

Heinen, a native of Langley, was named Eagles captain midway through the 2013-14 BCHL season, and led the Eagles and all BCHL rookies with 62 points this campaign. In 59 career BCHL games with Surrey and Merritt, Heinen has amassed 29 goals and 64 points, all while compiling only 8 minutes in penalties.

Prior to joining the Eagles, Heinen was a member of the Richmond Sockeyes team that was named Western Canada Junior "B" champions in 2013.

Congratulations Danton on this terrific achievement!

The Eagles begin the 2014 BCHL playoffs Tuesday, March 4th in the Mainland division semi-final against the Langley Rivermen. Games 3 and 4 will be held at South Surrey Arena Friday, March 7th and Saturday, March 8th at 7:00 pm. For ticket information, please call the Eagles office at (604) 531-GOAL (4625) or secure your seats online at www.surreyeagles.ca
Posted by Chris Wahl at 11:34 AM