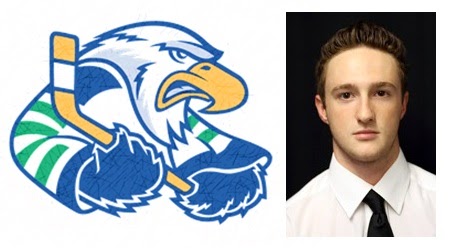 Step one of the Surrey Eagles' off-season transition was finalized Friday, as the team announced the acquisition of forward Josh Blanchard (96) from Penticton. The move finalizes the trade made in January involving Nic Pierog and Anthony Conti, as Blanchard now joins the Eagles a year ahead of his pending commitment to NCAA Division I St. Cloud State.

Blanchard, from Kelowna, put up 7 points in only 28 games played with the Vees in 2013-14 as he missed some time with injury, but comes to the Lower Mainland as a speedy, skilled addition to Surrey's roster. He scored 29 times two seasons ago with the major midget Okanagan Rockets in their trip to the BCMML final, and put up his first BCHL goal in that season's playoffs as an AP call-up to the Vees.

Welcome to the Eagles Josh!

The full release from the Eagles follows:

The Surrey Eagles are pleased to announce the acquisition of forward Josh Blanchard (96) from the Penticton Vees.

Blanchard is the player named as future considerations from a January 4th transaction that saw Surrey acquire forward Anthony Conti (95) from the Vees in exchange for forward Nicolas Pierog (93).

Blanchard, a native of Kelowna, recently completed his rookie BCHL season with Penticton. In 28 games played, the 17 year-old amassed 3 goals and 7 points. During the 2012-13 season, the 5’8” forward scored 29 goals and 55 points with the major midget Okanagan Rockets, the BCMML finalists in 2013.

Blanchard is committed to NCAA Division I St. Cloud State for the 2015-16 season.

“We’re excited to add another skilled forward in Josh Blanchard to our program,” stated Eagles head coach/general manager Peter Schaefer. “He comes here having already attracted the attention of a top NCAA program, and we’re certainly counting on him to figure prominently in our squad next winter.”

The Eagles would like to extend a warm welcome to Josh Blanchard as he becomes the most recent addition to the organization.
Posted by Chris Wahl at 1:08 PM