Heinen Nominated for CJHL Rookie of the Year 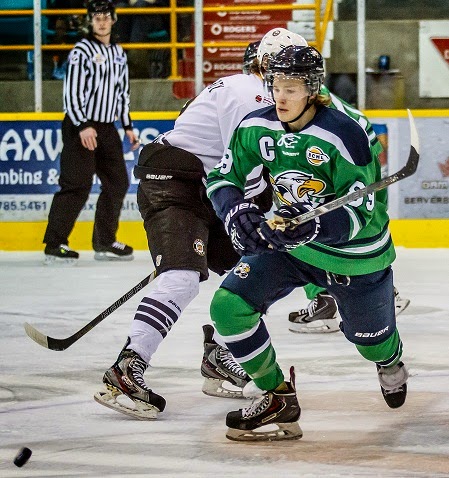 More accolades yesterday for the Eagles captain, Danton Heinen, as the Canadian Junior Hockey League announced the 18 year-old Langley product is one of five nominees for the CJHL Rookie of the Year award.

Heinen, the BCHL Rookie of the Year and Most Sportsmanlike Player, finished with 62 points during the regular season and was Surrey's co-leader in playoff scoring with 7 points from six games.

The full release from the CJHL is available here. The winner will be announced next week.

A brief news release from the team follows:

The Surrey Eagles congratulate captain and leading scorer Danton Heinen on being named as one of five nominees for Canadian Junior Hockey League Rookie of the Year.

Heinen, from Langley, led all BCHL rookies in scoring during the 2013-14 season with 62 points (29-33), and was named Eagles captain in mid-January, The 18 year-old University of Denver commit appeared in all but one of Surrey's 58 regular-season games, compiling only 8 minutes in penalties.

Heinen was awarded the Bruce Allison Memorial Trophy for BCHL Rookie of the Year, and the Bob Fenton Trophy, which is awarded to the league's Most Sportsmanlike Player, in March.

The CJHL, which comprises the 10 Junior "A" leagues in Canada including the BCHL, will announce the winner during the week of May 5th.

Surrey Eagles season-ticket packages are now available. Visit www.surreyeagles.ca for details on our new pricing structure for 2014-15 or call (604) 531-GOAL (4625) for more information.
Posted by Chris Wahl at 11:51 AM