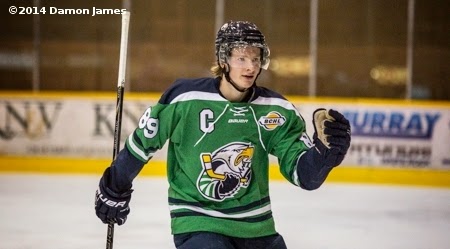 The Eagles announced this afternoon captain Danton Heinen, who committed to the University of Denver in March, will attend the NCAA Division I school beginning this fall. Surrey's 2013-14 scoring leader, fresh off a sensational freshman campaign in the BCHL that saw him win league Rookie of the Year and Most Sportsmanlike Players honours, had an option to defer his scholarship to 2015-16, but elected to join the Pioneers this fall and kickstart the next phase of his promising career.

As good as Danton Heinen was on the ice this past season for Surrey, he was just as professional, if not more so, off it. And while I'm sure Eagles fans would have loved to see him in Surrey silks for another season (or two!), it's certainly a feather in the club's cap to be able to celebrate him as a perfect example of "Smart Hockey."


The full release from the Eagles is available here.

In the absence of recording technology, a transcript of my conversation with Heinen from this past Friday follows:

What influenced your decision to leave for Denver this year as opposed to next?
I originally had the option to leave this fall or next. It was a very difficult decision to leave the Eagles and I had a lot of fun playing close to home, but everything I’ve heard about Denver is that they’ll have a pretty competitive team next season and I want to be a part of it.

What factors helped you make your decision to commit to the Pioneers in March?
I went down there on a visit at the end of the season and I knew right away it was somewhere I wanted to be. I had a real comfort level with the campus and the people there are great.

What are your plans for the summer?
Right now, I’m training locally, but I’ll leave for Denver in mid-June. I’m planning on taking courses for about a month and a half to help me settle in. It’ll be a good adjustment since I’ve been away from school for a year now.

What will you take from your time with the Eagles and in the BCHL?
I really enjoyed my time in Surrey and it was a lot of fun to be able to play close to home. I can’t say enough about my coaches and teammates last season, I’ll definitely miss them and again, it’s a very tough decision on my part to leave early.

Are you a bit surprised at how quickly things have happened for you over the past year?
For sure, you never really expect things to happen as quickly as they have for me. But I got a great opportunity last summer to come to Surrey and play for the Eagles, and I am really thankful for it.

All the best in the Mile High City "Heinz," we'll be watching!
Posted by Chris Wahl at 1:43 PM