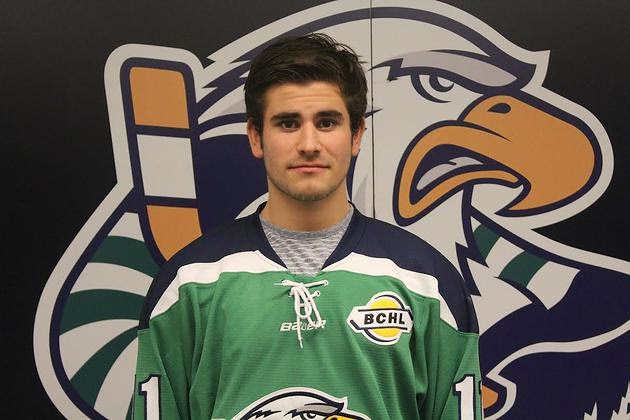 The Eagles announced Thursday that local product Ben Vikich has committed to the team for 2014-15. Vikich (94) comes back to Surrey after beginning last season with the Eagles before spending the majority of the year in Portland, Maine with the Junior Pirates of the USPHL.

Vikich was one of Surrey's "black aces" in their run to the 2013 RBC Cup semi-final, and in chatting with him briefly earlier this week, is extremely excited to again be donning Eagles silks this coming winter.


SURREY – The Surrey Eagles Hockey Club are pleased to announce the commitment of forward, and Semiahmoo Minor Hockey Association alumnus Ben Vikich for the 2014-15 BCHL season.

Vikich, 20, spent the majority of the 2013-14 season with the USPHL’s Portland Pirates after beginning the year in Surrey. In 26 games with the Maine club last season, Vikich recorded seven points from four goals and three assists, adding 36 minutes in penalties.


“I’m excited to come back to Surrey for my 20 year-old season,” said Vikich. “as a kid I regularly attended Surrey Eagles games hoping to one day represent my home-town team.”


“We’re very excited to include Ben in our group this coming year,” said Blaine Neufeld, the Eagles’ Director of Hockey Operations, “he’s a player that we can trust in all three zones of the ice and will lead by example.”


“Ben’s character will enable him to be a real influence on our younger players on and off the ice. He’s a born leader and we love that aspect about him as well,” Neufeld added.

Further player announcements will be made in the coming weeks.


Welcome, Ben, to the Eagles family!

Sandler To Attend Wings Camp: The BCHL announced yesterday former Eagle Luke Sandler will attend the Detroit Red Wings development camp this summer. Sandler played out his junior eligibility with Nanaimo this past spring after a trade from Surrey at the January 10th deadline, totalling 18 points and 90 penalty minutes in 30 games with the Clippers and Eagles. Luke and I spent the 2012-13 season together in Trail before our short stint together in South Surrey, and while I'm not entirely sure how quickly the lifelong Blackhawks fan will adapt to wearing Detroit colours, I hope he has a great camp. Good luck Sandy.
Posted by Chris Wahl at 10:19 AM